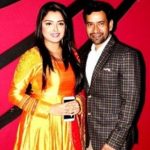 He made his debut in 2007 Bhojpuri film ‘Chalat Musafir Moh Liyo Re’ as a supporting actor. In 2008, he acted in a lead role in ‘Nirahua Rikshawala’ which made him a star.

Amrapali Dubey is an actress appearing mostly in Bhojpuri movies. Before entering to movies, she had acted in few TV serials. Her role as ‘Suman’ in  ‘Rehna Hai Teri Palkon Ki Chhaon Mein’ serial in NDTV was well received by the viewers. She made her film debut in 2014 Bhojpuri film ‘Nirahua Hindustani’ opposite Dinesh Lal Yadav.