Manteswamy was a 15th century Saint and a folk hero. Sri Siddappaji was the disciple of Manteswamy. He lived between 1535 and 1585. He continued the legacy of Manteswamy and carried forward the Neelagara tradition. ‘Manteswamy Kavya’ is one of the most important oral epics of Karnataka. Neelgaras – the professional singers of South Karnataka have kept the ‘Manteswamy Kavya’ epic alive by centuries of performances.

Kannetthi Nodravva Khandayada Mooruthiya song was performed by various artist over the years. It is very hard to find the origin of these songs. No one knows who composed and wrote the song. These Janapada Folk songs are the treasure of our Culture and nativity and they were part and parcel of our daily lives. Singer M. Mahadevaswamy also came up with his version of the song in the music of M. S. Maruthi and Manoranjan Prabhakar. 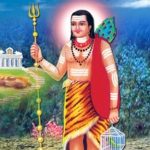