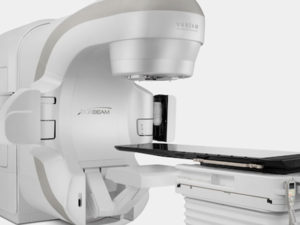 What is Radiation Therapy: Radiation Therapy often abbreviated RT, RTx, or XRT is a treatment used for cancer to control or kill malignant cells and, less commonly used for other diseases like thyroid, blood disorders, and noncancerous growths. It can have a targeted, powerful effect on tumors that are confined to a specific area.

Radiation can form part of curative or palliative treatments against tumors. Radiation therapy involves delivering powerful waves of energy to disrupt the ability of cancer cells to grow and divide, killing cancer cells, slowing their growth, and shrinking tumors to enable surgery.

For what types of cancer is radiation therapy used?

Radiation therapy is used to treat cancerous tumors, including cancers of the brain, breast. cervix, larynx, lung, pancreas, prostate, skin, spine, stomach, throat/neck, uterus, and soft tissue sarcomas. It can also be used to treat
leukemia (cancer of the blood-forming cells) and lymphoma (cancer of the lymphatic system)

Is radiation therapy used only to destroy tumors?

No. It can also be used to prevent cancer cells from forming in the first place a technique called Prophylactic Radiation Therapy. In situations where it is not possible to completely eliminate the cancer, radiation therapy can be used to shrink the tumor, with the goal of reducing pain, pressure and other symptoms in order to improve the patient’s quality of life. When radiation is used in this way, it is called palliative radiation therapy.

How does radiation therapy work?

Radiation kills cancer cells by damaging their DNA, the molecules containing genetic information, which destroys their ability to divide and reproduce. Radiation also kills normal cells, but cancer cells grow and divide more quickly than normal ones and as a result are more susceptible to the damage from radiation. In addition, normal cells are better able than cancer cells to repairs themselves and repairs themselves and recover from the effects of radiation. This is one reason why radiation treatment sessions are given over the course of several weeks which gives the normal cells a chance to repair themselves during the time between sessions. This process is called “fractionation” because the total radiation dose is divided into fractions which are given a treatment at a time and which accumulate over time. In addition,  the doctor is able to shape the radiation beam to match the size and location of the tumor while minimizing dose to the healthy tissue surrounding it.

What is the duration of radiation therapy?

Although the number of treatments given varies depending on the type of cancer you have, your general health, and the radiation technique used radiation treatments are typically given five days a week for six to seven weeks. When radiation is used for palliative care, the course of treatment is shorter, usually two to three weeks. Each treatment session typically takes 30-60 minutes.

You will not experience any pain or discomfort during your treatment sessions, although small number of people feel a slight warming or tingling sensation in the area being targeted.
You will not be able to see, smell, taste, or hear the radiation.

What are the side effects?

Side effects, if there are any, are cumulative,

which means they develop over the course of treatment as the radiation builds up in the tumor. They can be minor or severe, depending on the size and location of the tumor, your general medical condition, and the treatment applied. Two of the most common side effects are irritation or damage to the skin near the treatment site and fatigue.

Short-term effects of radiation treatment can include the following:

1. fatigue or lethargy
2. skin irritation, including swelling, blisters, and a sunburned or tanned appearance
effects specific to the area of treatment, such as hair loss, urinary problems, nausea, vomiting, and diarrhea
3. tissue inflammation, such as esophagitis, pneumonitis, and hepatitis
4. rarely, a drop in the number of white blood cells or platelets

Long-term effects also depend on the site of treatment and can include:

Stiffening and restricted movement: After neck therapy, for example, the jaw can stiffen. This can occur as a result of tissue scarring. Exercises may be advised after cancer surgery and radiation therapy to help loosen movement.
Skin effects: These include delayed wound healing and a spidery red or purple appearance caused by dilated capillary blood vessels.

Diarrhea and bleeding: These can occur as a result of bowel damage when the abdomen receives radiation therapy.
Hormone problems: These can include hypopituitarism or hypothyroidism, dry mouth, memory loss, and infertility.
A second cancer caused by radiation exposure: Although rare, soft-tissue sarcoma, for example, can be caused by high doses of radiation. The risk of recurrence of the cancer being treated is higher than the risk of a new cancer being caused by radiation therapy.

Not all of the above examples are likely or even possible with all types of radiation therapy. The likelihood of getting any one of the longer-term side effects depends largely on the individual.

People opting for radiation therapy should, therefore, receive guidance from their healthcare team about the balance of risks and benefits.

Will radiation therapy make me radioactive?

Will radiation therapy make my hair fall out?

Will radiation therapy make me nauseous?

Radiation therapy affects only those areas being treated, so if you are not receiving radiation to your abdomen, it is unlikely that you will experience nausea as a result of treatment. In some cases, patient’s nausea is caused by other aspects of his or her treatment, such as chemotherapy or pain medication.

Can the radiation therapy itself cause cancer?

Theoretically, yes, but it is highly unlikely. In addition to the cancer cells being targeted, some normal cells surrounding the area being treated can be damaged by the radiation, which could eventually cause another cancer known as second primary cancer. The possibility of this happening, however, is quite small, because modern radiotherapy techniques enable the doctor to target the tumor precisely while minimizing dose to nearby healthy tissue. The statistics on radiation-induced cancers indicate that the probability of causing a new cancer is less than 5% at 30 years after treatment. This future risk is far less than the immediate risk of dying from the original cancer if it is left untreated

Will I be able to drive after my radiation treatments?

Almost all patients are able to drive during their course of treatment and, in fact, are able to continue all their normal daily activities, including work. You should, however, ask your doctor about your individual situation

Note: Any medical information published on this website is not intended as a substitute for informed medical advice and you should not take any action before consulting with a healthcare professional.