Dharmendra Hema Malini Movies List: The pair of Actor Dharmendra and Hema Malini is considered as one of the best onscreen and off screen pairs of Hindi Cinema. They have acted together in more than 30 Hindi movies and most of them are super hit films.

Actor Dharmendra is one of the iconic actors of Bollywood. He has worked in over 300 films in a career spanning five decades.  In 2012, he was awarded India’s third-highest civilian honour Padma Bhushan by the Government of India. 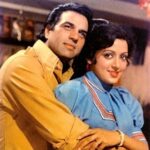 Actress Hema Malini is one of the most successful leading actresses of Indian Cinema. Over Five decades of her career She had acted in more than 150 movies. Her first film with Dharmendra was Tum Haseen Main Jawaan (1970). The two got married in 1980. The couple has two daughters, Esha Deol and Ahana Deol.

Here we have made an effort to list out the movies that features both Actor Dharmendra and Hema Malini. Lets have a look at the list.