Aakasha Baagide Song Lyrics: Aakasha Baagide is a song from the 1988 Kannada movie Samyuktha, directed by K. N. Chandrashekar Sharma. The film was produced by S. A. Govinda Raj and V. Bharath Raj under the banner Nirupama Art Combines. The film was based on a kannada novel ‘Musuku’ by writer Kakolu Saroja Rao.

Musicians Shankar Ganesh scored the background music for this film. This song was composed by very famous director Singeetham Srinivasa Rao with lyrics penned by one and only Chi. Udaya Shankar. Aakasha Baagide was rendered by the Icon S. P. Balasubrahmanyam. 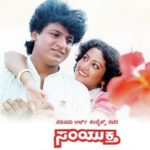