Gururaj Hosakote is an Actor, Writer, Composer and Singer in Kannada film industry. He was born on 1948 in Mudhola, Bagalakote, Karnataka. He has song lot of folk songs also. some of his notable works are Sangya Balya, Thavarina Thottilu, Rama Shama Bhama, Jogi, Jogayya, Hudugaru and others.

Jhankar Music is the music label of this movie. This song was composed by Rajesh Ramanath with lyrics penned by S. Narayan himself. Arishina Kuttiravva Song was rendered by singers S. P. Balasubrahmanyam and Gururaj Hoskote. 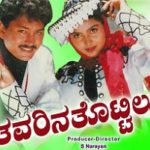