Bareyada Kaigalu Lyrics: Bareyada Kaigalu is a song from the 1968 Kannada movie Mannina Maga, written and directed by Geethapriya in his directorial debut. The film was produced by M V Venkatachalam and Alexandar under the banner Sudarshan Movies. The film was a great hit and went on to win National Film Award for Best Feature Film in Kannada.

This song was composed by Vijaya Bhaskar with lyrics penned by Geethapriya himself. This song Bareyada Kaigalu was rendered by S. Janaki.

This song is about the progress of the nation. This is patriot song speaks about hard work, farming, unity to build a new country with progress in various fields. good lyrics by Geethapriya. 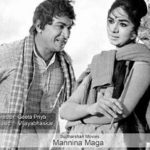