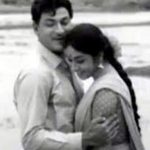 Actress Kalpana popularly known as ‘Minugu Taare’ among her fans, made her film debut in the 1963 movie Saaku Magalu directed by B. R. Panthulu starring Dr Rajkumar, Sowcar Janaki and others. She had the opportunity to make her debut with Dr Rajkumar in the role of his sister. The pair went onto produce some memorable movies acting together in 18 films.