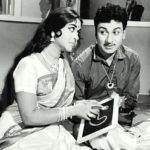 Actress Saroja Devi has acted in around 200 films in a career spanning over six decades. She has acted in Tamil, Kannada, Telugu and Hindi language movies. She played the lead heroine in 161 consecutive films in 29 years between 1955 and 1984. She is known by the epithets ‘Abhinaya Saraswathi’ in Kannada and ‘Kannadathu Paingili’ in Tamil.

Here in this post, we have made an attempt to list out Dr Rajkumar and Saroja Devi Kannada movies.