This film marks Dr. Rajkumar’s 200th movie. Lahari Music was the music label of this movie. This song was composed by Upendra Kumar with lyrics penned by Chi. Udaya Shankar. Haalallaadaru Haaku Neeralladaru Haaku song was rendered by Dr. Rajkumar and B. R. Chaya.

He went onto make more Kannada movie with all the top stars in Kannada including the debut movies of Shivarajkumar in Anand [1986] and Raghavendra Rajkumar in Chiranjeevi Sudhakara [1988]. He also directed Puneeth Rajkumar in Eradu Nakshatragalu as child artist. Thus becoming the only director, who had directed Rajkumar and his three sons. 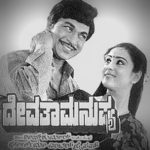