This film was remake of the 1974 Hindi film Benaam. Sangeetha music was the music label of this movie. This song was composed by Sathyam with lyrics penned by R. N. Jayagopal. Ide Nadu Ide Bhaashe was rendered by S. P. Balasubrahmanyam.

This evergreen song became a integral part of Karnataka Rajyotsava celebration in Karanataka and Kannadigas. This song featured singer SPB on screen singing the song. Great song with great lyrics. 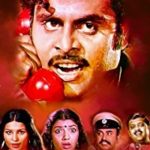