Sangeetha is the record label of this movie. This song was written by Hamsalekha and composed by Shankar Ganesh. Karunada Thayi Sada Chinmayi song was rendered by one and only S. P. Balasubramanyam. 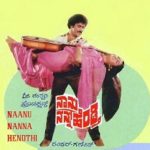