The film is loosely based on the Charlie Chaplin’s master piece City Lights. The film was remade in several Indian languages like Telugu as Pelli Pandiri [1997], in Tamil as Nilave Mugam Kaattu [1999] and in Hindi as Humko Tumse Pyar Hai [2006]. 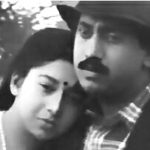