Pogaadirelo Ranga Song was composed by Music director G. K. Venkatesh using one of the keerthanas of Purandara Dasaru. This song was rendered by S. Janaki. Sangeetha is the music label of this movie. 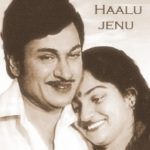