The film was remade in Telugu as Kula Gouravam in 1972 and starred N. T. Rama Rao with Jayanthi and also in Tamil. Saregama was the music label of this movie. 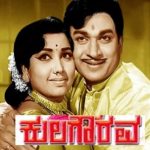 Check Out The Lyrics Here…