The directors of this movie Rashi Brothers are accliamed actor S. Shivaram and his elder brother S. Ramanathan. Together they produced lot of films in different languages. S. Ramanathan directed malayalam and Hindi movies starring Amitabh Bachchan in films like Bombay to Goa (1972) and Mahaan (1983) and Zamaanat [1977]. S. Shivaram is noted actor in Kannada cinema. His association with director Puttanna Kanagal produced some unforgattable characters in films like Sharapanjara, Naagarahaavu, Shubhamangala and others.

Saregama is the music label of this movie. This song was composed by Vijaya Bhaskar with lyrics penned by Chi. Udayashankar. Yaaru Nee Yaaru song was rendered by playback singer L. R. Eswari. 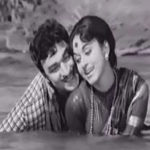