Actor Dilip Kumar [Mohammed Yusuf Khan], made his acting debut in the debuted 1944 Hindi film ‘Jwar Bhata’ directed by Amiya Chakravarty. In a career spanning over five decades, Dilip Kumar worked in over 65 films. He is considered as one of the best actors of India. He had a distinct acting style that was way ahead of his time. 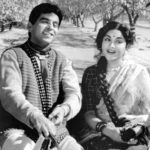 Actress Vyjayanthimala made her film debut with the Tamil film Vaazhkai (1949) at the age of 16. Her first Hindi film was Bahar (1951), directed by M. V. Raman. She paired with actor Dilip Kumar in the 1955 film Devdas, which garnered her critical acclaim. The pair of Dilip Kumar and Vyjayanthimala, went to act together in 7 films.

In this article we have made an attempt to list out ‘Dilip Kumar Vyjayanthimala Hindi Movies’. Lets check out the list..