Kamal Haasan And Ambika Movies List | Happy Birthday Ulaganayagan: Ulaganayagan Kamal Haasan and Actress Ambika have acted together in several Hit Tamil films. They are considered as one of the best onscreen pairs in Tamil Cinema. 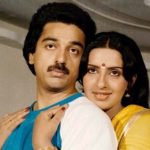 Actress Ambika was one of the leading actress in 1970’s and 1980’s. She was a multilingual star and she had acted in Tamil, Malayalam, Kannada, and Telugu movies with superstars like Kamal Haasan, Rajnikanth,  Vijayakanth, Rajkumar, Ambareesh, Mammootty, Mohanlal, and others.

The duo of Kamal Haasan and Actress Ambika had acted in several memorable Tamil films. On the occasion of Ulaganayagan Kamal Haasan birthday, We have made an attempt to list out Kamal Haasan And Ambika Tamil Movies. Lets check it out..

1. Kadal Meengal [1981]: Kadal Meengal is a 1981 Tamil movie in which actress Ambika acted as a step-sister and daughter of Kamal Haasan who played dual role as Father and Son. This film directed by G. N. Rangarajan, was a remake of the Malayalam movie ‘Meen’.

Kadal Meengal featured Sujatha, Nagesh, Swapna, K. A. Thangavelu, K. A. Thangavelu, Suman, Sukumari and other actors along with Kamal Haasan and Ambika. Songs of this film were composed by Ilaiyaraaja and lyrics were penned by Kannadasan, Panchu Arunachalam and Gangai Amaran.

2. Vazhvey Maayam [1982]: Ambika acted in a small role with Kamala Haasan in 1982 Tamil film Vazhvey Maayamwhich featured Sridevi, Sripriya in the lead along with Jaishankar, Manorama, Prathap Pothan, Junior Balaiah and others.

R. Krishnamoorthy was the director of this film and Gangai Amaran composed the songs written by lyricist Vaali. This film was a remake of a 1981 Telugu movie ‘Premabhishekam’ starring Nageswara Rao, Sridevi and Jayasudha in the lead.