Vijay Films Directed By His Father | Happy Birthday Thalapathy: On the occasion of Tamil Actor Vijay’s birthday,  We have made an effort to list out the movies starring Vijay and directed by his father S. A. Chandrasekhar.

It is a known fact that Vijay’s parents S. A. Chandrasekhar and Shoba Chandrasekhar played an important role in  shaping the career of actor Vijay. They set the stage for their son in Tamil film industry.

S. A. Chandrasekhar directed Vijay in 8 films in a leading role. Vijay also made a Special appearance in movies  Sukran [2005] and Pandhayam [2008] directed by his Father. 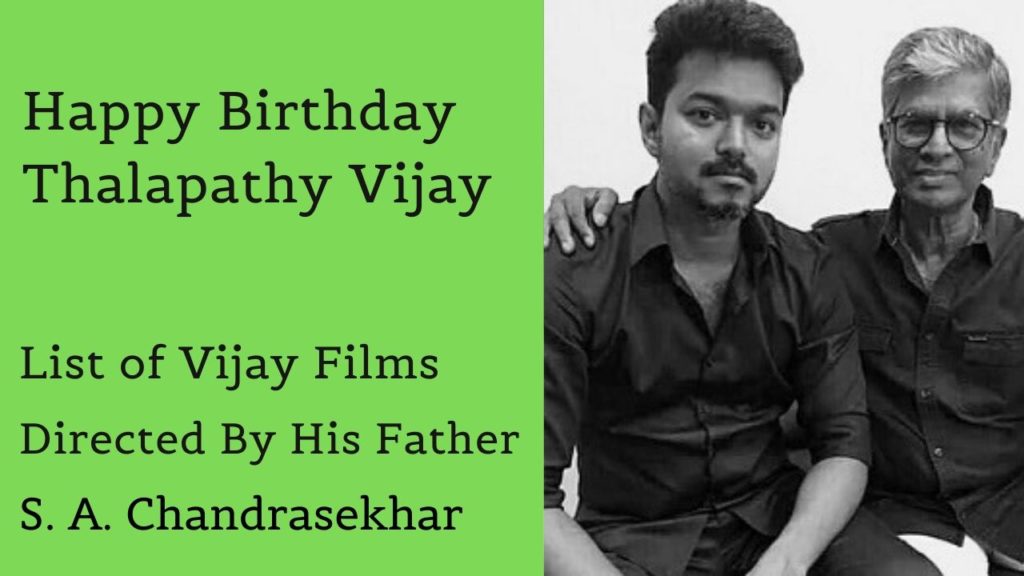 Lets look at the films directed by S. A. Chandrasekhar starring his son Vijay as Hero. Before that on behalf of the entire team of Lyricsraaga, we wish Happy Birthday to Thalapathy Vijay.

1. Naalaiya Theerpu [1992]: Naalaiya Theerpu marked the debut of actor Vijay in a leading role, after appearing as a child artist in few films. The young actor was just 18 years of age when he made his debut through this film.

Interestingly the story of this movie was written by Vijay’s mother Shoba Chandrasekhar and the film was directed and produced by S. A. Chandrasekhar under their home banner V. V. Creations.

The songs of this film was composed by 12 years old M. M. Srilekha, under the name Manimegalai. The lyrics of the songs were penned by lyricists Pulamaipithan, P. R. C. Balu and Bharani. Playback singers S. P. Balasubrahmanyam, K. S. Chithra, S. N. Surendar, Minmini, and Sangeetha sang the songs in the film.

Even though Vijay’s debut film failed at the box office, It didn’t stop the actor from becoming one of the most bankable star of the Tamil film industry with huge fan following.

2. Senthoorapandi [1993]: After making an unsuccessful debut in Naalaiya Theerpu, Vijay paired up with actor Vijayakanth [in a cameo] in 1993 film Senthoorapandi. This film was produced by B. Vimal under the banner B. V. combines.

3. Rasigan [1994]: Director S. A. Chandrasekhar directed his son Vijay for third consecutive film, produced by B. Vimal. This is the first film in which the ‘Ilaiya Thalapathy’ tag was added to Vijay in title.

Rasigan fairly did well at the box office. The film featured Vijay, Sanghavi, Srividya, Vijayakumar, Manorama, Goundamani, Senthil, Vichitra, S. P. Rajkumar, and others. Deva was the music director of this film. the film  contains 6 tracks written by Vaali and P. R. C. Balu. The song ‘Bombay City Sukka Rotti’ marked the debut of actor Vijay as a playback singer. The song become a hit and Vijay went onto sing several hit songs.

4. Deva [1995]: Deva Tamil film featured Vijay, Swathi, Sivakumar, Manorama, and others. The music was composed by Deva, while the lyrics were written by Vaali, Pulamaipithan and Kavidasan. The film contains some memorable songs like ‘Oru Kaditham’, ‘Chinna Paiyyan’, ‘Aiyayo Alamelu’ rendered by Vijay himself.

5. Vishnu [1995]: Vishnu Tamil movie is the fifth combination movie of director S. A. Chandrasekhar and actor Vijay. The film starred Vijay, Sanghavi, Jaishankar, Senthil, and others. The music was composed by Deva. It was later dubbed in Telugu as Mr. Hari Krishna and Hindi as Jeeta.

6. Maanbumigu Maanavan [1996]: This movie featured Vijay, Swapna Bedi, Chinni Jayanth, Manivannan, and others. As usual Music was composed by Deva. This film marked the debut of Swapna Bedi.

7. Once More [1997]: This time director S. A. Chandrasekhar made his son actor vijay to share the screen with legendary actor Sivaji Ganesan and also he brought back the evergreen onscreen pair Sivjai Ganesan and Saroja Devi one more time for the cine lovers.

The film was remade in Telugu as Daddy Daddy. Once More Tamil film is considered as one of the memorable films in Vijay’s career because of his collaboration with the legend Sivaji Ganesan sir.

8. Nenjinile [1999]: As of now, ‘Nenjile’ Tamil film remains as the last movie directed by S. A. Chandrasekhar with Vijay in lead role. Even though he had made few guest appearances in few films directed by his father, this is his last collaboration as a lead actor in his fathers film. This film features Vijay, Isha Koppikar, Sonu Sood, and others. The film’s music was composed by Deva.