Viswasam Trailer Released | Ajith Kumar Nayanthara Siva: The Trailer of one of the most anticipated Tamil movie of Thala Ajith was released today.

Viswasam was written and directed by Siva. This is Directors Siva’s fourth consecutive film with actor Ajith Kumar. Their previous films includes Veeram [2014], Vedhalam [2015] and Vivegam [2017].

D. Imman is the music director of this film. The soundtrack contains six song, a theme song, four Karaoke version and a n instrumental.

The film was produced by Sendhil Thyagarajan, Arjun Thyagarajan under the banner Sathya Jyothi Films and presented by T.G.Thyagarajan. G. Saravanan is the Co Producer, Raahul is Executive Producer and Thandavam, Anbazhagar are Production Executives.

Viswasam is all set for a 2019 Pongal release along with Karthik Subburaj directed Petta starring none other than the Superstar Rajinikanth. The trailer of Petta was released couple of days ago and it stormed the social media. Its going to be treat for Tamil cine lovers to witness two huge releases. 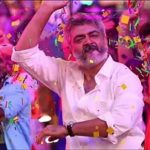