Anthimaalai Neram Lyrics were written by upcoming Tamil lyricist Karthik Netha and the song was composed by music director Justin Prabhakaran. Anthimaalai Neram song was beautifully rendered by one of the most happening playback singer in Tamil and Telugu – Sid Sriram.

Sid Sriram added one more song to his hit list through this song. His voice and rendition is the plus point of this song. Sid Sriram is one of the most happening singer in Tamil now. He is giving hit songs one after another collaborating with different music directors. His unique voice and his strong command over Carnatic and western R&B, enables him to sing the songs and elevate them to next level. This song is no exception, His rendition gives it a different texture.

Justin Prabhakaran – who made his debut as a music director through the 2014 Tamil film Pannaiyarum Padminiyum has impressed the music lovers through Anthimaalai Neram. The song sounds more as a fusion of Carnatic and Western. some of memorable films of Justin Prabhakaran includes movies like Orange Mittai [2015] and Oru Nalla Naal Paathu Solren [2018].

Karthik Netha’s lyrics is one more highlight of this song. This upcoming Tamil lyricist is making lot of buzz through his songs and his interview in which he accused famous lyricist for utilizing his lyrics. some of notable songs of Karthik Netha includes ‘Poraney Poraney’ from Vaagai Sooda Vaa, ‘O Crazy Minnal’ from Naduvula Konjam Pakkatha Kaanom, ‘Enthaaraa Enthaaraa’ from Thirumanam Enum Nikkah, ‘Kaathalae Kaathalae’ from 96. 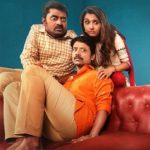