Tamizhan Endru Sollada Lyrics were penned by lyricist Madhan Karky and the song was composed by music director D. Imman. This song was rendered by Anirudh Ravichander, Lavanya Sundararaman and D. Imman.

This is the debut Tamil film for actress Nidhhi Agerwal. She made her bollywood debut in 2017 through the film Munna Michael with Tiger Shroff. followed by that she acted in three Telugu films Savyasachi [2018], Mr. Majnu [2019], iSmart Shankar [2019]. 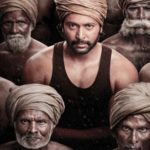