Anangae Sinungalama Lyric Video contains few romantic pics of lead actors Karthi and Rakul Preet Singh with few pics of dance of Karthi. in some pics we can see Karthi with guitar and dancing with group of men and women. There are few clips of making of the song, where we can see Karthi shaking his legs for the tunes. Anangae Sinungalama is dance number with right of mix of romance, dance, energy and style.

Its a typical Harris Jayaraj song with good instrumentation which gives more importance to the lyrics and melody. The song starts with a random sound that we often heard in Harris songs and slowly creeps into our mind. The lyrics of Thamarai is the highlight of the song with beautiful Tamil. The costume and choreography gives more charming effect to the song that will definitely appeal to the youngsters. Anangae Sinungalama is one more trademark Harris Hit.

The crew of Dev includes Director of Photography R. Velraj, Editor Ruben, Choreographers Dinesh and Shobi, Stunts by Anbariv, Production Designer Rajeevan, Executive Producer K. V. Durai and others. Junglee Music is the music label of this movie. Dev is scheduled to hit the theaters on February 14, 2019.

Check out the song Anangae Sinungalama from Dev and express your opinion.. 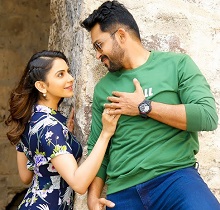