The lyrics of the Tamil version of the song was penned by lyricist Madhura Kavi and the song was rendered by singers Ananya Bhat, Mohan Krishna, Santhosh Venky, Renjith Unni, Balraj Jagadeesh Kumar, Yogi Sekar, H.S.Srinivasa Murthy and Vijay Urs.

Lets look at the technical side of the song. This song was Programmed by Ravi Basrur, Sachin Basrur and V. M. Bharath. Mixing of the song was done by Kishore Kumar. S [Hyderabad] and B. R. Naveen Kumar. The song was recorded and mastered at Ravi Basrur Music [RBM] studio.

KGF Chapter 1 was written and directed by Prashanth Neel of Ugramm fame. Ugramm which was released in 2014 was an action thriller featuring Srimurali and Haripriya. The film was liked by fans and critics alike. After four years Prashanth Neel is coming with KGF, A period drama set in the 70s and 80s.

The Tamil version of the film was distributed by Vishal Film Factory, Hindi version by Excel Movies & AA Films, Telugu version by Vaaraahi Chalana Chitram and Global United Media in Malayalam. This highly anticipated film will be released on December 21, 2018 in Kannada, Tamil, Telugu, Malayalam and Hindi.

Listen Dheera Dheera Kannada song from KGF and let us know what you think about this song in the comments section below. 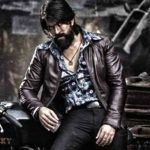