Heege Doora lyrics were penned by famous lyricist Kaviraj and the song was composed by music director Arjun Janya. This film marks 100th film of Arjun Janya as a composer. Heege Doora song was rendered by singer Vijay Prakash. Anand Audio is the music label of this movie.

Heege Doora Lyrics Video contains few montage of pictures of Both Ganesh and Bhavana. The video starts with Ganesh in a sad look, then there are few shots of Ganesh and Bhavana together in state of agony perhaps of the imminent separation. There are few flashback scenes of school days memories when Ganesh visits his school and sits in the classroom bench and getting nostalgic. in the flashback we can see the younger version of the lead characters and their interaction in school. The shots moves back and forth in time with Ganesh in very gloomy look with beard.

The lyrics penned by Kaviraj implies this separation. The beginning lines which says ‘If simply Sun leaves the sky, then the earth will become orphan’ and ‘If you leave this poor fellow in the middle like this with agony’ suggest that the Bhavana character is leaving Ganesh for some reason. because of which Ganesh is suffering.

There is one more interesting line ‘Before leaving please tell me the reason’, so may he seeking the explanation for this separation. This is pathos song of separation with good hear touching lyrics. in the end of the song there is line ‘Where ever you will be, be happy and the memories should haunt you a bit’.

99 Kannada movie is remake of 2018 Tamil film 96 starring Vijay Sethupathi and Trisha, directed by C. Prem Kumar. 99 Kannada film was produced by Ramu under the banner Ramu Enterprises. Santhosh Rai Pathaje is the cinematographer of this film.

Check out the Heege Doora Lyrics Video Released in Yoututbe and express your opinion.. 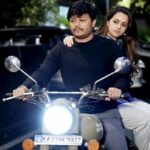