Hindi Fathers Day Songs List | Bollywood Father Sentiment Songs: Third Sunday of June is celebrated as Father’s Day honoring fatherhood and the importance of Father in a family, as well as their influence in society. 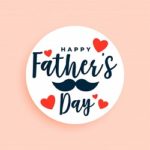 fathers-day-giftsThe day is held on various dates across the world and different regions maintain their own traditions of honouring fatherhood.

Father’s Day 2021 is on June 20th, Sunday. So on the account of Father’s Day, we have listed few Hindi Fathers Day Songs here. Following are the Bollywood Father Sentiment Songs.