The team of Amar, released the first video of the song ‘Marethu Hoyithe’ sung by Sanjith Hegde on April 5th in YouTube. Followed by this two more songs ”Summane Heege Ninnane’ – a romantic number rendered by Shreya Ghoshal and Sonu Nigam, ‘Onde Aetige’ written by Kaviraj and sung by singers Armaan Malik and Shreya Ghoshal.

The visuals in the video suggests that it might be party song. we can see few snaps of Dasrhan, Rachita Ram, Anup Bhandari, music director Arjun Janya, Devraj shacking their legs to the tunes. but the thing is you cant understand the lyrics as they are not in Kannada. 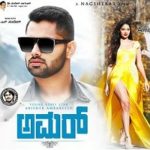 Lets look at some of the hit songs of lyricist Kiran Kaverappa, who has written Joru Paattu song lyrics.

Singer of the song is Jassie Gift of ”Lajjavathiye fame. This malayalam artist have some hit Kannada songs as well. He made his forey into Kannada films as a composer throuh the 2007 movie Hudugaata starring Ganesh and Rekha Vedavyas. Songs Stylo Stylo, Ommomme Heego and Eno Onthara.. became chartbusters. some of his memorable works in Kannada includes movies like Sanju Weds Geetha, Shyloo, Kiladi Kitty, Galaate, Myna, Aryan, Male, Love You Alia, Style, Prema Baraha and others.