Thooriga is the song from the ‘Guitar Kambi Mele Nindru’, directed by Gautham Vasudev Menon starring Suriya and Prayaga Martin in lead roles.

Thooriga lyrics were penned by lyricist Madhan Karky and the song was composed and rendered by Karthik. Joseph Vijay has played Guitar and Rajesh Vaidhya played Veena in this song. 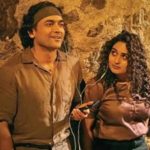 Navarasa is produced by director Mani Ratnam and Jayendra Panchapakesan under the banners Madras Talkies and Qube Cinema Technologies. This web series will have nine episodes based on nine emotions such as anger, compassion, courage, disgust, fear, laughter, love, peace and wonder.

Navarasa is a film made for a genuine cause of helping jobless film workers in Tamil cinema, whose life is impacted by the Covid pandemic. The series will be released on 6 August 2021 through Netflix.