This song was produced by Deepan Boopathy and Sanjay Raghvan. The music video of the song was released today and it was directed by Parthiban Ravi. Rebel Audio is the music label of this song.

A bullet hits the target from which emerges the image of Thandai Periyar in the light of electrical bulb kind of effect. Then under A huge statue of Periyar, a group of young people comes forward with the typical Periyar costume of Black shirt and white dhoti with red strips. Next comes An auto rickshaw from which STR gets down and salutes Periyar statue and the song dance begin.

Madhan Karky’s lyrics captures the current happenings in Tamil Nadu politics and the issues that were plaguing the society from long time such as caste, Religion etc.. against which Thandai Periyar started movements. The song targets the fringe group who made an attempt to destroy Periyar statue, motivated by political powers.

Simbu has rendered this song with his trademark aggression. He never hesitated to make political comments and there is no surprise that the makers of the song chose STR for this. He has done his job. Not much to say about the music. Its a typical beat song which can appeal to masses and I think that was the whole purpose of this song. The masses to should understand what is happening around them in

the name of politics. When the political powers trying to annihilate to Periyarism in Tamilnadu, attempts like this sending a clear message that,  no one can erase periyarism.

Lets look at the technical crew if this song..
A. Viswanath is the Cinematographer and the song was edited by Rajeesh. Dastha Choreographe the song. Lalgudi Ilayaraja is the Art director and he has done his best. Costumes were designed by Maheswari Chanakyan.

Programming was done by Jerard Felix, Santhosh Jayakaran. Vikram and Allwyn were in-charge of Rhythm section. Guitar was played by Godfray. Periyar Kuthu song was recorded at RT Studios. The song was mixed by Lawrence Vishnu, Visakh and Iniyan. It was mastered at Sage Audio, USA.

Listen to Periyar Kuthu song and make sure that we all follow Periyar path.. 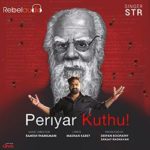