Pogaru Karabuu Video Song Released | Dhruva Sarja Rashmika Mandanna : Karabuu is a Kannada song from the upcoming Kannada movie Pogaru. Karabuu Video Song was released yesterday on the occasion of Rama Navami. This song is getting good response from viewers and it is trending in YouTube.

Pogaru Kannada movie was produced by B. K. Gangadhar under the banner of Sri Jagadguru Movies and directed by Nanda Kishore. This is his 7th movie as director. He made his directorial debut through the film Victory starring Saran in 2013. He went on to direct Adyaksha [2014], Ranna [2015, Mukunda Murari [2016], Tiger [2017], and Brihaspathi [2018].

Pogaru is the fourth movie of actor Dhruva Sarja. He made his acting debut in 2012 through the hit film Addhuri, directed by A. P. Arjun. Followed by successful films Bahaddur [2014], and Bharjari [2017].

The teaser of Pogaru was released on October 6th, 2018 on the occasion of Dhurva Sarja’s birthday. The team released dialogue trailer on October 24 th, 2019. The teaser and trailer created lot of anticipation for the movie among Kannada movie goers. The film is expected to be released on 24th April 2020. 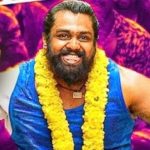