Ramuloo Ramulaa Telugu Song Lyrics Video was released on October 26th on the account of Diwali festival and the song received overwhelming response from the Telugu cine lovers. Within 24 hours the song got 83 Lakhs [8.3 million] views to became the most viewed South Indian song on YouTube within 24 hours, beating the record held by Tamil song ‘Rowdy Baby’ from the movie Maari 2 starring Dhanush and Sai Pallavi.

This is the third film of Allu Arjun having the music of Thaman S. Previously Thaman S composed song s for the movies Race Gurram and Sarainnodu.

This is the third collobaration of director Trivikram Srinivas with actor Allu Arjun. Their previous films are S/O Satyamurthy [2015] and Julai [2012]. Trivikram Srinivas made his directorial debut in 2002 with ‘Nuvve Nuvve’ starring Tarun and Shriya Saran.

This Telugu film ‘Ala Vaikunthapurramloo’ was produced by Allu Aravind and S. Radha Krishna under the banners Haarika & Hassine Creations and Geetha Arts. PDV Prasad Executive Producer of this film. is the Aditya Music is the audio label of this movie. The film is schedule to release on January 12, 2020.

Earlier the team of the movie released the first single ‘Samajavaragamana’ on 27 September 2019. The song was penned by famous Telugu lyricist Sirivennela Seetharama Sastry and rendered by one of the most happening singers in the south film industry ‘Sid Sriram’.

Ramuloo Ramulaa song video contains lyrics with clips of the actual dance number from the movie and few clips of musicians like Thaman, Sivamani and others. we can see singer Anurag Kulkarni and Mangli also. It also have few clips of making of the song, dance rehearsals with choreographer Sekhar and artists. This YouTube video also have few behind the scenes footage featuring director Trivikram and others. At the end of the video we can see members of the cast wishing fans a happy Diwali. 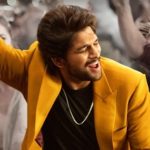