Rowdy Baby is quite an interesting number, especially Dhanush’s lyrics. The lyrics of the song is combination of three languages Tamil, Telugu and English. Yuvan tired to give a song that appeals to the masses without compromising its melody. He tried to present a peppy song with Kutthu beats.

Dhanush lyrics sounds funny, peppy and local. words like soda, kari kozhambu, silku satta, kedikku kedi are the words that gives the pakka local feel and Telugu words like pothaam, vesthaam and lot of English words that fits seamlessly in the tune.

The lyrics video has some dance moves featuring Dhanush and Sai Pallavi choreographed none other than Prabhu Deva. Sai Pallavi looks cute and beautiful. Prabhu Deva also featured in the video with Danush. Needless to say that Sai Pallavi is a great dancer and the video promises that one can expect a great dance performance by her, dancing to this peppy kutthu song.

The real highlight of the song is singer Dhee’s rendering. Her voice adds a beautiful peppiness to the number. Dhanush tried his best as a singer. I think this is the first song she is singing for music director other than Santosh Narayan, under whom she sang songs like Disco Woman her debut song for the film Pizza II: Villa in 2013, Naan Nee in Madras, Rathina Katti from Meyaadha Maan, Kannamma Kannamma from Kaala, maadila nikkura maankutty from Dhanush’s Vada chennai. But my personal favorite is Ey Sandakaara from Irudhi Suttru.

Composed and Arranged by Yuvan Shankar Raja the other technicians and musicians of the song includes Joshua Mark Raj playing the Electric Guitar, Saxophone was played by Raja, Trumpet and Trombone by Babu. Harmony of this song was handled by Srivardhini and Senthildass.

Listen Rowdy Baby and let us know what you think about this song in the comments section below. 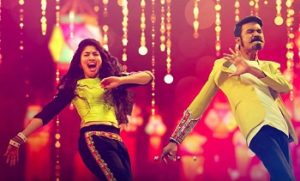 Note: You can also send us your article regarding Music, Movie, Books,  Travel, Health, Food, Business, Education etc.. and we are happy to post your articles in our blog. come and join hands with us and send in your articles to lyricsraaga@gmail.com