Yajamana Title Song Released | Darshan | V Harikrishna: Yajamana Title Song Released few days ago and the song is trending in YouTube. This is the  fourth song released from the album of Yajamana, an upcoming Kannada movie directed by Pon Kumaran. The team earlier released three songs Shivanandi, Ondu Munjane and Basanni. All these songs are getting good response from the audience.

This song was composed by V. Harikrishn. Yajamana Title Song reminds us of ‘Bombe Helutaithe’ song from Raajakumara which was written by Santhosh Ananddram. The song priases the lead actor describing his helping nature, his character, his generosity, hard work, his sacrifices etc.. Vijay Prakash has rendered this song. D Beats is the audio label of this movie.

The video also has few clips of Rashmika Mandanna, rehearsing dance moves and expressions. V Harikrishna is also be seen in the video interacting with B. Suresha and Darshan. The video also features few clips from the movie. There is a shot where Dasrhan takes a family photo and driving the car with other artists, walking along the beach etc.. The video also shows the making of few stunt sequence and as well as song making as well. 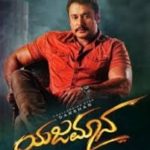