This song was composed by Ravi Basruru. Lyrics of the song was written by Sachin Shetty Kumble. This song was rendered by well known playback singers Sanjith Hegde and Anuradha Bhat. Aananda Audio is the record label of this movie.

The music director of this movie Ravi Basruru, who made his debut in 2014 hit film Ugramm directed by  Prashanth Neel starring  Srimurali and Haripriya in the leading role. He won the Film Fare Best Background Score Award his debut movie. The duo of  Prashanth Neel and Ravi Basruru went on to work together again in blockbuster Kannada movie  K.G.F: Chapter 1 starring Yash.  Ravi Basruru made music and composed songs for films like Just Maduveli, Mufti, Anjani Putra, Samhaara and others 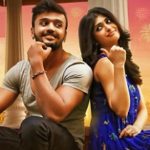