The promo video of first single ‘Arabic Kuthu’ was released a week ago in YouTube official channel of Sun Pictures. It was announced that Beast First Single will be released on February 14th on the occasion of Valentine’s Day. 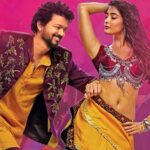