After serving out a year of hard labor in the salt mines of Endovier for her crimes, 18-year-old assassin Celaena Sardothien is dragged before the Crown Prince. Prince Dorian offers her her freedom on one condition: she must act as his champion in a competition to find a new royal assassin.

Her opponents are men-thieves and assassins and warriors from across the empire, each sponsored by a member of the king’s council. If she beats her opponents in a series of eliminations, she’ll serve the kingdom for four years and then be granted her freedom.

Celaena finds her training sessions with the captain of the guard, Westfall, challenging and exhilarating. But she’s bored stiff by court life. Things get a little more interesting when the prince starts to show interest in her … but it’s the gruff Captain Westfall who seems to understand her best.

Then one of the other contestants turns up dead.. quickly followed by another. Can Celaena figure out who the killer is before she becomes a victim? As the young assassin investigates, her search leads her to discover a greater destiny than she could possibly have imagined.

Dorain Havilliard, The crown prince of Adarlan offers a bargain to the most notorious assassin Celaena Sardothein to compete with twenty three men in a contest to become the King’s champion. The winner will serve the king for six years and later will be provided freedom. Celaena who has been a prisoner and a slave in the salt mines of Endovier agrees and negotiates the tenure for four years instead of six to be the king’s champion if she succeeds.

The assassin who has wasted away in the prison has to rebuild her body to the former glory to win the contest. Along her recovery, she slowly builds relationship with Dorain and befriends Chaol and the princess Nehemia Ytger.

As the time passes, Celaena realizes that the competition and the castle are not what it is. A mysterious darkness lurks in the shadows, leaving many competitors in gruesome deaths.

The story starts off with a slow pace but gradually builds up, leaving the readers more intrigued. The book at one point turns out darker and turns out a page turner. This is a must read for every young adult or fantasy book reader. Throne of Glass has a pretty strong beginning and stronger characters.

Sarah J Maas has created a different world and the readers are definitely going to love it. The main female lead Celaena is loaded with sassiness to the end. The readers will end up loving her because of her wits. She owns the two male leads Dorain and Chaol throughout the book. 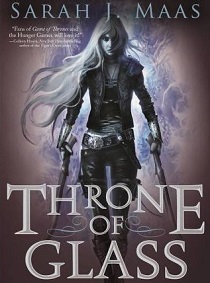 About the Author: Sarah J. Maas is an American Author born on 5 March 1986 New York City, New York. She is best known for her debut novel, Throne of Glass, published in 2012. Others notable work of Sarah J. Maas includes A Court of Thorns and Roses series.