Lord Murugan is also known as Subrahmanya, Kartikeya, Kumara, Skanda and many other names. He is the son of Lord Shiva and Parvati. He is younger brother of Lord Ganesha.

Enakkum Idam Undu song lyrics were written by lyricist Tamil Nambi and composed by singer T. M. Soundararajan himself. Like other TMS Murugan songs this song also makes the listener dwell deep into the spiritual world and surrender themselves to God Murugan. TMS composition and rendition comes straight out of his soul, so that the listeners can connect to the song and feel it in their heart.

Famously Known as TMS, T. M. Soundararajan [Thoguluva Meenatchi Iyengar Soundararajan] was a one of the greatest singer Tamil Nadu ever produced. In a career spanning over six and half decades, TMS had rendered more than 10,000 songs in 11 different languages in 3162 movies. Apart from Movie songs, He is known for his devotional songs as well especially Lord Murugan devotional songs. 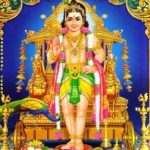