Rakita Rakita Rakita song Telugu version lyrics were written by  lyricist Bhaskarabhatla and the song was rendered by singers Ananthu, Susha, Santhosh Narayanan, and others.

Jagame Thandhiram Tamil movie was written and directed by director Karthik Subbaraj and the film was produced by S. Sashikanth and Co-Produced by Chakravarthy Ramachandra under the banner Y NOT Studios. 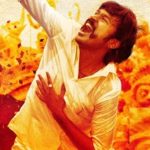