Sarvam Thaala Mayam Song Lyrics Video contains some beautiful visuals ranging from Rajasthan Deserts, North East to Himalaya. The songs seems like a journey of the Protagonist in the quest of exploring music of different regions and cultures of our nation. we can G V Prakash traveling in his bike, walking in the desert, sailing in the boat and interacting with musicians with different musical instruments.

This is Rajiv Menon’s third directorial venture after 17 Years. He made his directorial debut in 1997 with Minsara Kanavu, A music love triangle starring Prabhu Deva, Arvind Swamy and Kajol. He directed Kandukondain Kandukonda, A family drama in 2001 featuring ensemble cast of Mammootty, Ajith Kumar, Tabu, Aishwarya Rai and Abbas.

Sarvam Thaala Mayam is scheduled to release on 28 December 2018. It will be released as “Madras Beats” in some English speaking territories. 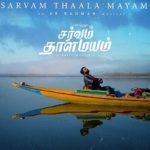 The music album of Sarvam Thaala Mayam contains 6 tracks out of which one is Thyagaraja Keerthana. ARR composed 4 songs and Rajiv Menon has also composed one track called Varalama written by Madhan Karky. The songs of this film was written by lyricist Madhan Karky, Arunraja Kamaraj and Na. Muthukumar, who worked on the film before his death in August 2016. The telugu version of the songs were written by lyricist Rakendu Mouli.