D. Imman is the composer of this song. Kannaana Kanney is a lullaby written by famous lyricist Thamarai and the song was beautifully rendered by the most happening singer Sid Sriram. Sid Sriram got a unique voice which adds a different texture to the song and it elevates the song to the next level. He is delivering consecutive hit songs and Kannaana Kanney is no exception.

The song have great sentimental lyrics by Thamarai and melody by Imman. Sid Sriram vocals are the plus point of this song. The song captures the essence of a father’s love for his daughter.

Kannaana Kanney Song Lyrics Video contains few images of beautiful scene’s of Ajith with his daughter and with Nyanatara and other family members and friends it seems. The video also have some parts of song recording showcasing D. Imman, Thamarai and Sid Sriram at work.

The first three images shows Ajith holding a baby and the fourth one a silhouette image where Nayanthara is feeding the baby sitting in the laps of Ajith. The next image in the backdrop of Ayyanar temple in which Ajith is paying with his daughter sitting on the Horse statue, the next image is in the backdrop of filed where herd of sheep’s were seen and Ajith is showing something to the baby holding her in his left hand.

The technical crew and artist worked in the song are: Electric And Acoustic Guitars were played Keba Jeremiah, Slide Guitar was played by Prakash Sontakke, Nadaswaram by Balasubramaniam, Harmony Vocals conducted by D. Imman and Ranjan was in charge of music production and Chennai Strings Orchestra was Conducted By Yensone Bagyanathan.

Viswasam was written and directed by Siva. This is Directors Siva’s fourth consecutive film with actor Ajith Kumar. Their previous films includes Veeram [2014], Vedhalam [2015] and Vivegam [2017]. The film was produced by Sendhil Thyagarajan, Arjun Thyagarajan under the banner Sathya Jyothi Films and presented by T.G.Thyagarajan.

Viswasam is all set for a 2019 Pongal release along with Superstar Rajinikanth’s Petta directed by Karthik Subburaj.

Listen to this beautiful melody from Viswasam and express your opinion 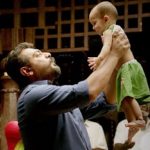