Maatanaadi Maayavade Song Lyrics was penned by lyricist Santosh Naik of ‘Bit Hogbeda Nanna’ song from Raambo 2. The song was composed by Dr. Kiran Thotambyle in his debut movie as a music director. Maatanaadi Maayavade song was rendered by, one of the most happening playback singer in Kannada Armaan Malik.

The singer is in peak of his career as his songs are becoming chart busters. some of the hit songs of Armaan Malik includes ‘Ninna Raja Naanu’ from the recently released ‘Seetharama Kalyana’, ‘Nodivalandaava’ from the Shivarjkumar and Sudeep starrer ‘The Villain’, ‘Ondu Male Billu’ from Darshan’s ‘Chakravarthy’, ‘Neenu Irade’and ‘Sariyaagi’ from Mungaru Male 2, ‘Mathaadu Nee’ from ‘Tarak’ and others.

Maatanaadi Maayavade Song Lyrics Video confirms that this is a romantic number. The video starts with the production banner, then the director Chandru and music director Dr. Kiran Thotambyle’s pic holding the electric guitar, then the title appears with trade mark Uppi style title ‘I Love You’ with a tag line ‘Nanne Preethse’.

The song begins with the two stills of lead actors Upendra and Rachita Ram followed by a small romantic clip. Later we can see some footage’s of shooting spot. again the song goes back to the making of this intimate song. the video contains few more moving images of the actors.

Check out the Maatanaadi Maayavade Song Lyrics Video and express your opinion about the song.. 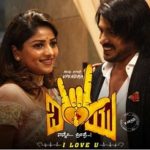